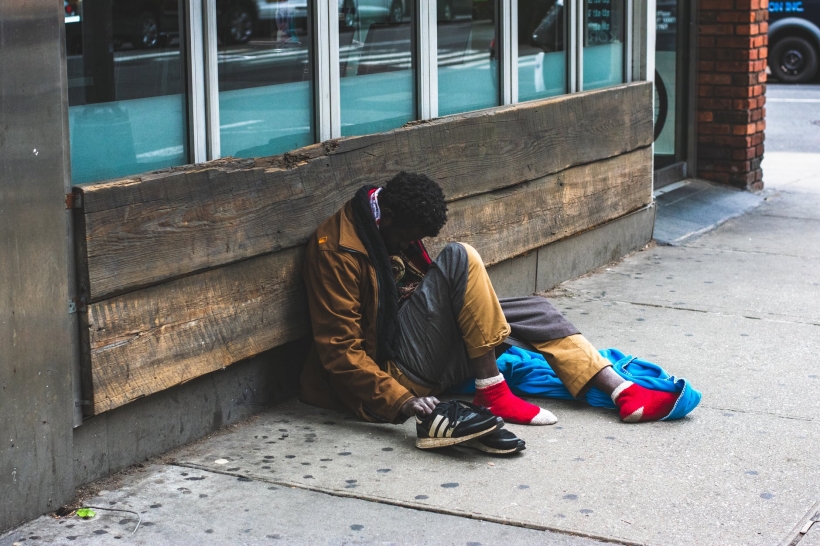 Sometimes I wish I was invisible.
Cause people just don’t care. They just look. They just stare. No one utters a word! I feel absurd.

I know they judge me because I smell of urine, feces and infection. I’m a derelict all haggard and disheveled. I too hate my own relection.

It wasnt always this way. I had a family and a home. I lost it all for going out to roam. Liquor, drugs and seeking prostitutes were my vices. Now my friends are only the lices. How I wish I could go back in time! But I can’t! Maybe I just need to dissapear.

Why are there so many homeless people? Why is there always someone on the train or in the street asking for food or asking for money? Is it always their fault? They stink up the trains. They interrupt our reading. Should they just disappear? Could it ever happen to us? Is it mental illness? Was it their choices that closed doors? I decided to ask.

Stoner as he called himself was only 25. Very attractive if you bathed and clothed him. He told me he was a homosexual. He told his parents at age 16 and he was kicked out the house. They were very religious. He fell into depression and living on the streets wasn’t easy. He was taken in by an older man that prostituted him out in exchange for room and board. He had no choice.

He started begging for money and bought drugs from wherever he could get them. He was 19 and looked older. He needed to numb his feelings. He detested those aggressive men. Then one day he tried to escape and was beaten so badly landing him in the hospital.

One of the nurses told him that God loved him. He was pissed off. His parents told him God had no place for his kind. What God was she taking about?

The hospital gave him money when they discharged him and the kind nurse drove him to the bus depot. She gave him money from her own purse too. He came to NYC on a Greyhound bus. His home and his own town were full of bad memories.

We spoke for almost one hour and I actually had no money to give him so we prayed. We prayed for his parents to have softer hearts. He agreed to enter a drug rehab center to get clean. God loves us all. God is forgiving. I wanted to cry but I held back the tears.

Happy to say that the last time I spoke with him he was clean and living in a small apartment. He was still asking for money but now by playing a guitar and singing. He no longer smelled but still had scars on his face from when he was beaten up. He and his dad were now talking. His mom had passed. He told me he realized God had always been around him.

It’s true everyone has a back story. Perhaps we don’t have to give them money. But please let’s pray for them. Love and prayer doesn’t cost a dime. Prayer does work if we believe. Do you believe?